In my continued adventure into digital painting I have finally tackled that most elusive of all painting subjects - the portrait. Not elusive for many, I'll grant you, but for me it is like standing at the base of Everest, staring up into the snowy glory and thinking 'While the adventure may prove to be fun, if I crash and burn I'll feel like shit so instead I'll grab a coffee and a postcard.'

The first is taken from one of my own photos of my daughter last year. 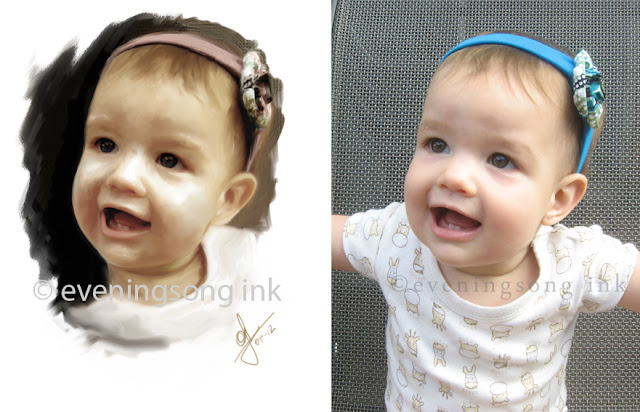 The second is an image from the internet of the inimitable Ginnifer Goodwin. I claim no credit for the original photo :) 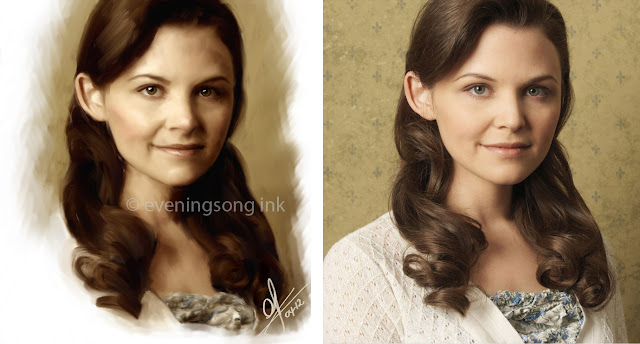 Both of the photos are altered in Photoshop first, increasing the yellow and red tones as would be seen in an old master's painting and playing with the curves, levels and contrast. In Corel Painter, the image is first cloned roughly to establish the basic form before each brushstroke is rendered individually. Once the base is good, I create new layers, using a variety of brushes, layer styles and opacities to achieve the final look.

The goal is to keep all the detail in the eyes and mouth, gradually reducing the detail towards the edges so the hair, clothing and background are mere brushes of colour. Also, to avoid making another photo-realistic reproduction all brushstrokes are kept rough and natural.
Email ThisBlogThis!Share to TwitterShare to FacebookShare to Pinterest
Labels: Digital Art, Photography

Hi! Thanks for taking the time to visit my blog. I hope you find some inspiration, humour and fun while you are here.

Please feel free to comment and if you try a tutorial or pattern I would love to see your result :)

Now for the legal bits...
Please note, all words, work and images are copyright Nicole Fowell/Eveningsong Ink. Full copyright and usage terms on the About Me page :)

And remember: Handmade = better made. Join the handmade revolution and support yourself, artists and small business people. Help me put the meaning back into gift giving and celebrations!